Drumin Dragonhelm pulled off his helmet and wiped the sweat from his eyes.  They had been in the swamp for three days now, and of the confident band that had set, out only three were left.  Or perhaps two.

Today I slayed a dragon.  It’s an admittedly small dragon, and not one of the most sought-after.  But it’s the first I’ve successfully painted in three sporadic decades of this hobby, and I’m proud of it.

“It’s no good, chief”, panted Grim Redbeard, wading towards the mudbank on which Dragonhelm had installed himself. “I couldn’t reach him in time”.  He took off his gauntlets to pick the leaches out of his beard.

Let’s start somewhere between the beginning and the end.  In 1987 Citadel released two sets of miniature dragons.  First, the DRAG series, comprising seven boxed sets (including the iconic Tom Meier Zombie Dragon, still available from Ral Partha Europe 30 years later, and the Great Fire Dragon of Combat Cards fame).  It was a bit of a hodgepodge of a series, but the chromatic Green, Blue, and Great Fire dragons form a cohesive set.  Each came with a 28mm human (or dwarf) figure, depicted – together with their dragon – in watercolour on the otherwise block-colour packaging.  Of the three, Orlygg of Realm of Chaos 80s calls the Green Dragon, DRAG3, “by far the superior piece of art“, and I’m inclined to agree.  I remember being drawn to them in my local games store in the early 90s.  A short story and stats for gaming were printed on the reverse, which encapsulates what I love about this series – they weren’t meant only as part of a pre-defined army list, but for gamers, readers, collectors, and painters equally. 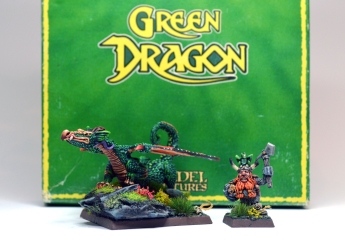 “Listen chief’, he ventured, between mouthfuls, ‘Now there’s only the two of us left, what do you say we just…”

“WHAT?!” roared Dragonhelm.  “I am the greatest slayer of dragons in the whole of Dwarfdom!  I’ve been up mountains, across icy wastes, down tunnels, everywhere after dragons!  And I’m not about to pack up and go home because this one’s hiding in a piddling little swamp!”

In December of the same year, Games Workshop would release a second, and at a first look even less coherent, set of dragons, the blister-boxed DS Series.  But between the snakelike, curved bodies of the Lava, Rock, and Serpentine Dragons, and “grabby” hands of the Nick Bibby’s Nightmare Dragon, the pattern for the S-shaped dragons that dominated the 1990s (and enabled Games Workshop to sell miniatures that filled a lot of space without requiring prohibitive amounts of lead) was established.

That’s not to say that earlier dragons were really small (although they’re perhaps unfairly perceived to have been).  In fact the scale creep is probably somewhat less pronounced than for other monsters; the Citadel Dragon, released in 1983, is still one of the biggest produced by any manufacturer.  Even the Green Dragon, one of the smallest among its contemporaries, required a 50mm base (rather than the usual 40mm for monstrous creatures), and includes design elements to prevent the lead from drooping (e.g. the spiralled tail, low-slung belly, and thick neck and wings). 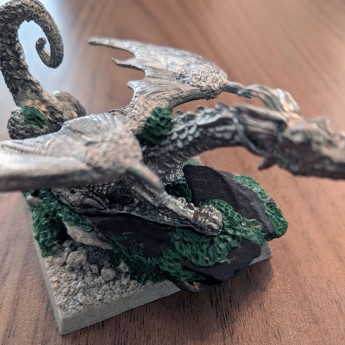 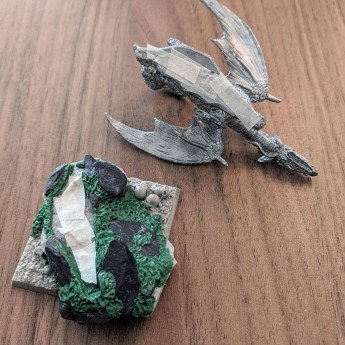 I built up a resin base with slate and green stuff to allow the integral base to fit snugly into a sort of trough (which I would fill with araldite), with a couple of pins for guidance, and sculpted some simple scales around the wings (which are also pinned to the shoulder).  As so often happens, I then promptly shelved the project.  Even painting a small dragon turned out to be quite intimidating.

“Err, yes, chief.” murmured Redbeard disconsolately.  He had been with Dragonhelm for years now, and he had to admit that there as no dwarf alive with his talent for finding aged, infirm, or recently-dead dragons – but he had the feeling that Dragonhelm was beginning to believe his own sagas.

I got things back on track by painting the dwarf.  I chose a mostly neutral colour palette of greys, cold browns, and metals, with realistic colours for the horns.  This contrasted with the bright green dragon helmet and orange beard.  As with the goblin siege crew I posted a couple of weeks ago, he suffered some frosting when I varnished him.  But he survived, and here he is, fully painted with a swampy base: Drumin Dragonhelm, Dwarf Minor Hero.  I was ready to resume work on the green dragon.

Some hours later, the two dwarfs reached a small rocky outcrop.  In the mud at the edge of the swamp were the unmistakable tracks of a dragon.

“Ha!” exulted Dragonhelm, “what did I tell you?” soon they were standing before a cave mouth.

Now, the dragon.  Back in the mid-to-late 1990s, after my first hiatus from the hobby, I was drawn back to fantasy miniatures by articles about the then-new Warhammer 4th Edition Wood Elves in White Dwarf 197.  I think I remember a supplement on dragons being published around the same time.  So having tried (and failed) to paint one 20 years ago, I based my colour scheme on the box art of the Wood Elf Forest Dragon (with elements of Ariel: Mage Queen of Loren – contender for “worst miniature” – and the basic 1990s Wood Elves.  I took some further inspiration from Wayne Anderson’s artwork for the 1979 book The Flight of Dragons, which went on to inspire one of my all time favourite films.  More about that at a later date.  Here’s the dragon: 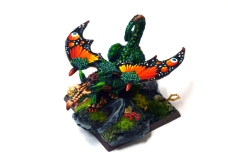 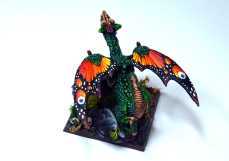 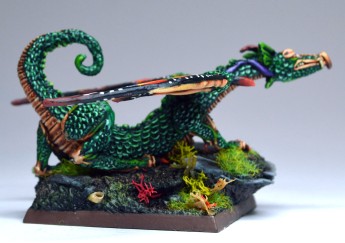 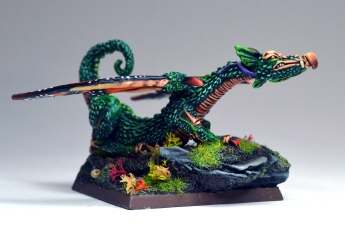 I painted this in six or seven sessions, keeping the base and miniature separate until both were finished.  First I worked on a decently earthy-looking base, then laid down simple blocks of colour with some rudimentary shading (bottle green for the scales, shading between flesh-tones and ochre for the underbelly, black-brown for the wings, with details in red, bone, and deep purple).  The basic patterns on the wings were loosely based on a monarch butterfly, and once they were blocked in I applied some heavy washes of Ceolia Greenshade, Reikland Fleshshade, Fuegan Orange, and Nuln Oil, according to the base colour.  Rather than relying on drybrushing I highlighted every scale manually, and used an overly complex combination of colours for the flesh tones, reapplying thin washes of Reikland Fleshshade to soften the belly.  Lastly I returned to wings, shading from bright yellow to deep red, picked out the claws, eyes, and gold coins, and used a final glaze of Waywatcher Green over the cool jade scales to create more of a “summer” palette.

“In you go lad,” said Dragonhelm, giving his lieutenant an encouraging slap on the back with the flat of his axe.  “Just spy out the land, and make sure this is the right place”.  Redbeard went cautiously inside, and for a few moments, all was quiet.

“Found it, chief!” Redbeard’s voice was getting closer by the second, “It’s big and green and AAAAARRRRGGGHH!!” 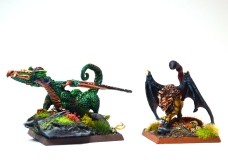 And it is kind of big (and green).  I’d already noticed the weight of it while painting, as well as its solidity – the neck and wings are thick enough to be quite inflexible.  But it was only after I assembled it that I really understood just how much bigger the dragon is than other monsters of the same period.  I’ve previously painted a Citadel Manticore – the dragon is about twice as long, with double the wingspan.  And this isn’t by any means a very large dragon… 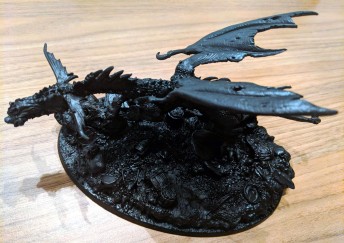 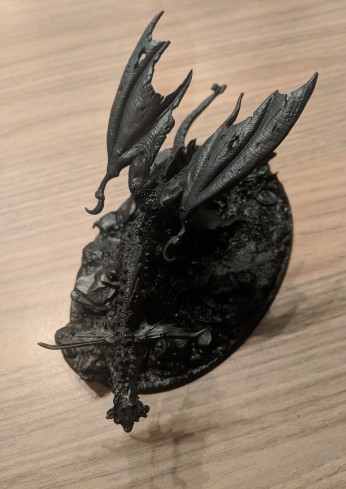 “Well done, lad.”  Said Dragonhelm softly, as he slid behind a pile of rocks by the cave mouth.  “Now you just lead it away while I get the treasure…”