Elves do not fear the dead 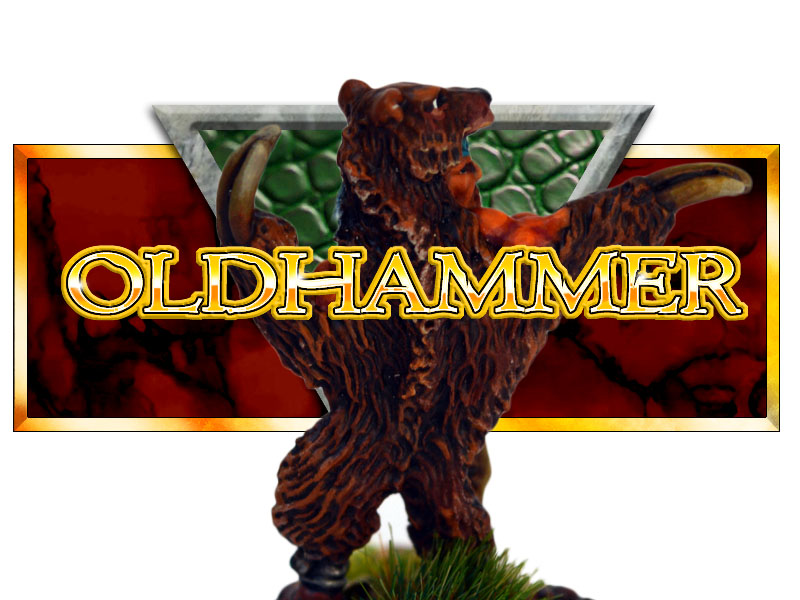 April is shaping up to be a really busy month.  This weekend my in-laws visited, next weekend an old friend is in town after a couple of years in Iraq, I’ve got a weeding to attend at the end of the month, and right now I’m in a hotel in a rather run down area of Vienna where I’ll be working for the next few days.  So, I have made progress on neither drawing nor painting, and I think the next few weeks will be much the same.  Still, I managed to squeeze in enough time to finish the details on two old Citadel Miniatures to a standard I’m happy enough with.

About six months ago a friend asked about our D&D campaign, Shin High Terror.  We’re notoriously unscheduled and take long breaks in play, so actually bringing him on board took ages.  But now that he’s part of the team I wanted to paint up a mini for his character as quickly as possible.

During character creation he described a male wood elf druid with an affinity for bears.  Fantastic!  We’re short of a tank class at the moment ( I think bears make passable tanks?), and I’ve always quite liked wood elves – I bought and failed to paint half an army in the mid 1990s.  So, the choice was obvious:  I’d use Jes Goodwin’s Elven Bear Master. 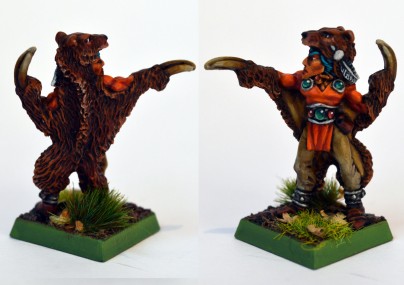 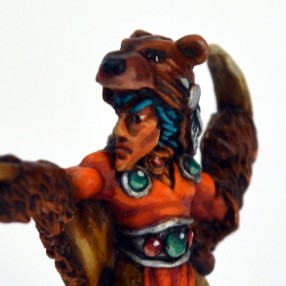 I didn’t realise just how narrow this mini’s head was.  I’ve only ever seen it pictured from the side before.

I painted it up pretty quickly.  The bearskin was easy enough, especially since I’ve just finished an Otherworld owlbear.  I used the overall colour scheme from the box of Games Workshop’s mid-90s  plastic wood elf archers, making a couple of minor changes to reflect specifics in my friend’s character sheet – green-blue hair and bronze skin – and a deep green for most of the gems (very successfully after several attempts) to create some variation.  The base is a little scruffy and I regret not doing a bit of freehand on the tights, but overall I think I’ve done a decent job of painting quite a characterful mini.

A few days before I finished we played our first game.  His character is still a wood elf druid, but is now also a girl named ‘Druantia’ – not quite the bearskin-clad warrior depicated here.  That’s fine by me – there are a good number of old an new wood elves I’d like to paint, once I’ve cleared a few places at the summit of Lead Mountain.

I also finished a commander for the small unit of skeletons in my Undead Legion.  I’ve never played any iteration of Warhammer, but I know units used to always have a commander, a champion, a standard bearer and a musician.  I think these have an effect in play; for me, they evoke nostalgia for my first forays into mini painting, they have narrative potential, and they’re usually visually a bit more interesting than the standard troops.  Unfortunately Citadel’s skeleton command units are also quite expensive on eBay – standard bearers in particular.  This one wasn’t too dear. 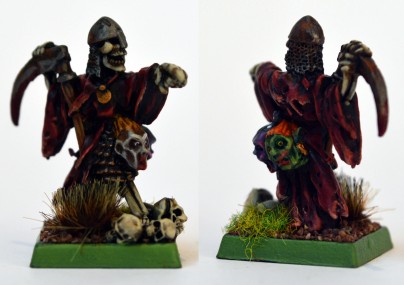 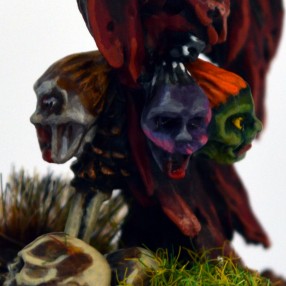 Again, I painted this quite quickly, in about three sessions spread over about a week.  Not what you’d call speed painting, but quite rapid for me.  I used a pretty classic undead colour palette, with brighter accents on the severed heads.  I chose white, purple, and green for the heads, with contrasting hair colours, and staring, presumably sightless (but can you be sure?) eyes.

For the base I  stuck with the basic formula I used back in the 90s.  I think I read it in White Dwarf, and although I’ve had to refine it now that paints and basing materials have changed, it’s more-or-less in keeping with the older minis.  It’s brown grit for earth topped with green static flock, with a couple of flourishes:  he is, after all, a commander and should stand out a little from the rank and file.  The pile of skulls he’s standing on is also functional.  His feet weren’t aligned perfectly to the base, so the skulls are obscuring the raised slotta tab.  As usual for undead this was fun and pretty easy to paint, and i’m looking forward to procuring and painting the rest of the command unit, and maybe over time a few others.

Towards the end of next week I hope to make at least a little progress on my Otherworld lesser boglings, Reaper squogs or an old Rogue Trader ambull.  But if this blog goes dark for a while, it’s just because life is getting in the way for a bit.