I’ve been painting miniatures on-and-off (admittedly more off than on) since around 1991, and I have fond childhood memories of the AD&D 2nd Edition Monstrous Manual and Fighting Fantasy books.  I collect, and play, retro video games – avoiding emulation wherever possible, and with a particular love of old RPGs.  But surprisingly, until a couple of years ago I’d never actually played D&D, and until last weekend I’d never played any edition of Warhammer.

I found out that Games Workshop were re-releasing Warhammer 40K while browsing Orlygg’s Realm of Chaos 80s blog.  I have to admit, it didn’t mean much to me.  But a couple of week’s later, my friend John mentioned that his friend John was looking for someone to play against.  Did I know anyone?  I did, and we setup a small event.  A very small event – it turned out that neither of the Johns nor I had any armies.  My friends did, but weren’t free that weekend.

John – that is, my friend John – and Kate, both being part of my D&D group, are creative types.  They did a great job of painting enough minis for us to play with, and rustled up a gaming table using a green towel, some blue ribbon, egg cartons and polystyrene.  We decided to try a sabotage scenario from the new rule book and John quickly placed a torch on the table, declaring it to be the ‘Tower of Light’.

I’m not going to attempt an old White Dwarf style battle report.  That was my original intention, but I didn’t take enough notes and to be honest, the battle was so enormously one-sided that I doubt much of a report would have made it out.  I didn’t deploy well, and didn’t fully understand the rules for bringing in reserves.  Consequently John – the other John – was able to swamp my meager defenders and get almost all his units to the objective with minimal resistance.  By the time my big-hitters and mobile units appeared on the table, all was lost.  The ‘Tower of Light’ was destroyed and my last stragglers, equipped with jet-packs, zoomed off into orbit to report another world subsumed into the Realm of Chaos.

It was immensely fun.

My Space Wolves guard the ‘Tower of Light’, rather too relaxedly 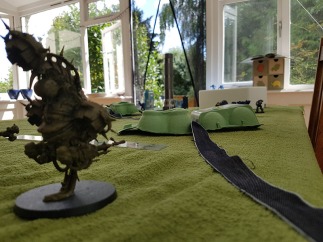 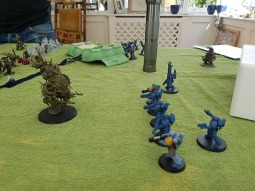 The first of them had reached my heaviest gunners by the halfway point of turn two.

Finally the alarm was triggered. Could I bring reinforcements in time? 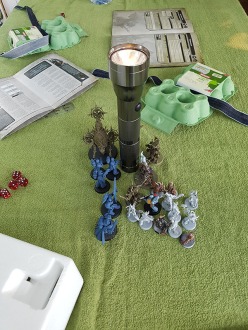 I could not bring reinforcements in time. My captain arrived at the scene of battle too late to change the outcome. 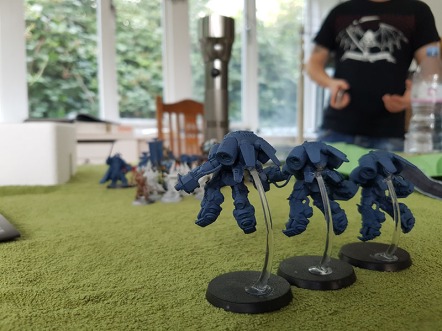 My jet-pack equipped marines landed in time to see the ‘Tower of Light’ exploding, before jetting back into orbit.

Since last weekend I’ve been toying with the idea of buying some 40K miniatures.  I’d probably be keen to do something loud and retro with some crossover with a fantasy army (so, maybe Noise Marines of Slaanesh bulked out with some demons and daemonettes).  But really, for now I’ve got quite enough in my painting queue and not enough in my wallet.  I’m also an extremely slow painter, so maybe a small warband would suit me better than a mighty army.

With that in mind, I downloaded the Lead Rising Realm of Chaos Warband Creator a couple of months ago, and hit “Give me a Warband” until I got something I could more-or-less assemble out of stock, the full details of which are at the bottom of this post.  Suffice to say, the Ruinous Powers of Excel led me to a ragtag band of Khorne’s faithful, armed with axes, clubs, knives and anything else they could find to turn the snow red with blood.  Led by a human hero with big ears and a long neck, a band of four human brigands, four chaos goblins, a human cultist and two dwarf warrior heroes (both of who sound a little more threatening than their leader) assembled on my shelf.  Well, almost – I only had the one suitable dwarf, but I can buy one more mini with no guilt.

Now all they need is a name, and some enemies to fight (and some paint).

Interestingly, not one of these minis is from Games Workshop.  The human hero and brigands are from the Russian Alternative, the goblins from Greenskin Wars, and the dwarf from Pantheon of Chaos (both available from Knightmare Games).  The cultist is from Hasslefree Miniatures.  He was already painted and based differently to the others, but I can live with that.  Over this weekend I painted 99% of the first dwarf, Zahardin Nagrath.  There’s still a little bit of tidying up to do, but I will be trying to do more miniatures in single sittings for a while.  That’s entirely pragmatism – I have a good-sized pile of unpainted miniatures and a modest shelf of painted ones – and I also need to to loosen up and improve my technique.

So why am I still typing?  There’s painting to do!