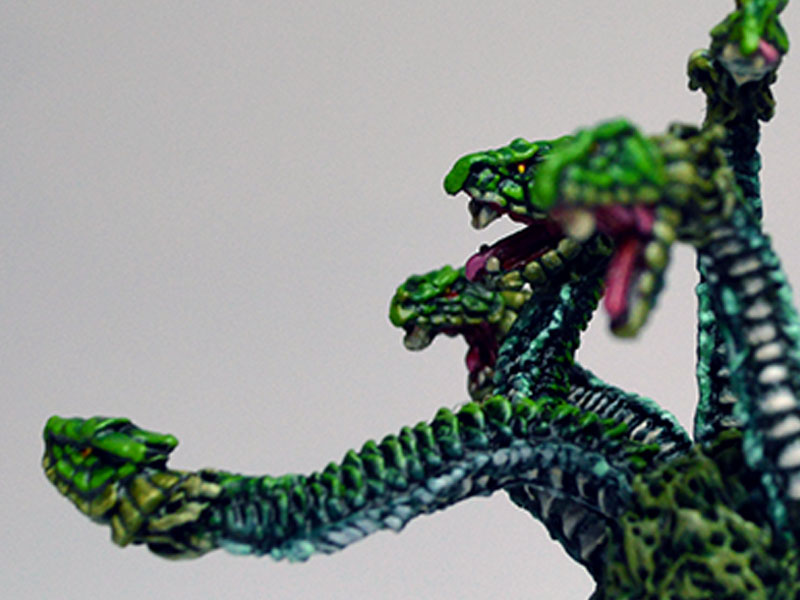 Like London buses, after a six month hiatus I’m posting my second blog entry of this weekend. Today it’s three monsters from Greek mythology – a harpy, Medusa, and the Lernaean Hydra. All of them Citadel Miniatures in the original lead, so I’m not sure whether the myths or the minis are more ancient.

Up first, Medusa and the harpy from the long since discontinued Citadel Miniatures Night Horrors range, which I’ve posted about before. I miss the days when Games Workshop sold generic fantasy creatures as well as their own copyrighted IP. There are a few hundred smaller companies to fill that void, but there’s something about this old range that really captures my imagination. Their later harpies became more bat-like, too, so she in particular is bit of an oddity. Both are single-piece miniatures, and I painted them both over two sessions (one to apply a base coat and washes, and the second to highlight, blend and drybrush). I’m really pleased with my blending on the harpy. 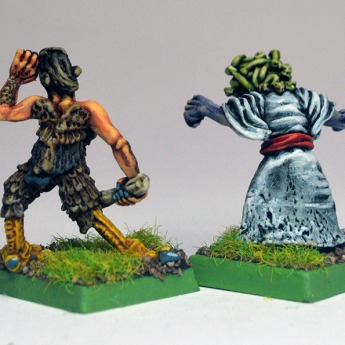 Next up, the mighty hydra. Unlike the above, Games Workshop have sold dozens of hydras over the years. This is one of the oldest, and therefore the smallest, and again it’s a bit of an odd-one-out. Most of his larger cousins have followed the pattern established by the D&D Monster Manual:

“The Hydra is a reptilian horror with a crocodilian body and multiple heads on long, serpentine necks . . . a typical specimen has five heads”.

But this one is pure snake. That probably makes it closer to the original hydra of myth, but it reminds me very much of Russ Nicholson’s illustration for the Fighting Fantasy gamebook Citadel of Chaos, which must have been released around the same time.

Honestly, I found assembling and painting this to be a bit of a chore. The heads emerge from a sort of hairy clump, and rather than being positioned individually they’re in two blocks. There were some quite big gaps to fill, and in doing so I ended up building a lot more volume into the central clump than I really should have. I continued using lots of green stuff on the base, sculpting a few basic craters to fill with ooze later, and glued on some toadstools from The Battleforge.

The colour scheme was inspired by the hydra from Citadel’s Monsters Combat Cards (which was actually the product that first exposed me to the world of minipainting). So, lots of green. The necks are kind of uneven – one in particular is very narrow – and some of the sculpting seems quite rough, so simple drybrushing didn’t really give me the results I wanted. Luckily I have some very small brushes, and perseverance, which I think in the end paid off.

After everything was dry, I applied a liberal layer of Vallejo Water Effects to the mud, and when that had dried I glued on more-or-less one of every variety of tufts, flock, lichen and moss that I had in my basing drawer, to give it a really chaotic, swampy, jungle feel. I’m glad to have finished him. Now, I’ve done the hydra and the manticore, so I wonder if I can paint the rest of the monsters from those Combat Cards?