A vile force of darkness has arrived!

In the videogame Dwarf Fortress (a very deceptively simple-looking ASCII game with a strange and storied history), goblin sieges, represented as they are by the lower-case letter ‘g’ are announced by the on-screen message:

A vile forces of darkness has arrived!

So.  Following on from last week’s Doom Goblins, here are the last of my Greenskin Wars goblins from Knightmare Miniatures (at least for this year), the crew for a goblin siege engine, their captain, and standard bearer.

Sadly the title of this post isn’t just a plug for a favourite game; these horrible little buggers went wrong from almost start to finish.  They caught drops of glue and paint in all the wrong places, suffering from ‘frosting’ when I spray-varnished in too-hot, too-humid weather, and seemingly repelled the light and focus when I tried to photograph them.

Leading the charge is the captain, dressed in heavy armour, with a sword and wolf-skin cloak.  I mostly followed Knightmare Miniatures’ in-house colour scheme, which adds some variety with a mix of bronze, gold, and iron, and followed my instincts for the spot-colours (comprising various faces around the miniature).  I’ll need to revisit him later in the year to clean up the errant blood on the bottom-right of his cloak and base.

Next up are the siege crew.  I chose simple colours for the leather and cloth, and the standard Citadel triad of Waaagh Flesh, Warboss Green, and Skarsnik Green, washed with Biel Tan Shade.  The end result was paler than I expected, but as these goblins probably aren’t very well-nourished I think that’s OK.  I painted the large stone in various greys washed with Reikland Fleshshade and highlighted up to Ogryn Camo for variety, and as usual picked out the goblins’ boils in red and yellow.  I think some flash on the hooded goblin’s right hand, which I failed to trim during prep, got the same treatment.  Perhaps that’s why, when they’re lined up, his hands hover fractionally behind the stone – he’s merely pretending to help carry the weight.

Overall these came out OK.  I could have put a bit more effort into them at every stage, but although they’ve got character (they are after all sculpted by the ‘Goblinmaster’, Kev Adams) they’re not the centrepieces in my collection.  I was happy to call these complete and move onto the next miniature. 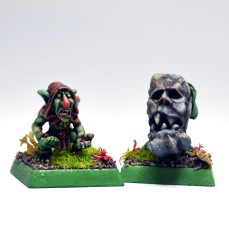 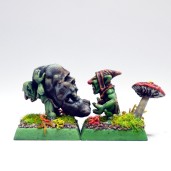 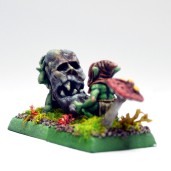 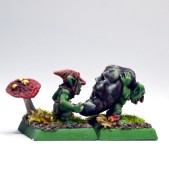 Case in point:  the standard bearer.  Formerly released by the now defunct Crooked Claw Miniatures, this was actually the sculpt that prompted me to back the first Greenskin Wars Kickstarter (which recently finished its third iteration).  I’m much happier with the result here.  I don’t find it very easy to paint metals, but these worked well (especially the gold face, with its Verdigris and glowing eyes).  I decided not to use any blood-spatter for now, but might add a little to the lower goblin’s sword – he, I think, should have defended the standard.

The main focus of this miniature is of course the large area of exposed goblin-green flesh.  I used more-of-less the same formula as with the siege crew, but added a glaze of Citadel Moot Green at the end.  The bright and saturated result is just what I was looking for, and I think it contrasts nicely with the earthy browns, dull iron, and red-orange tassels. 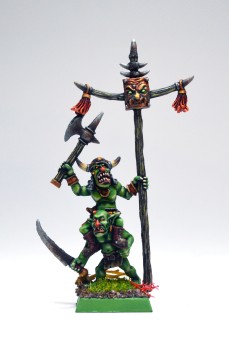 I have one more Knightmare Miniature to post – but it’s not a goblin this time.  After that, I’ll be posting mostly classic Oldhammer miniatures – including dwarfs, chaos dwarfs, undead (continuing my collection of Night Horrors), and even a small dragon – for the rest of this year.

← Final Doom (Goblins)
Do you want to live forever? →

4 Comments on “A vile force of darkness has arrived!”