Back from the Dead 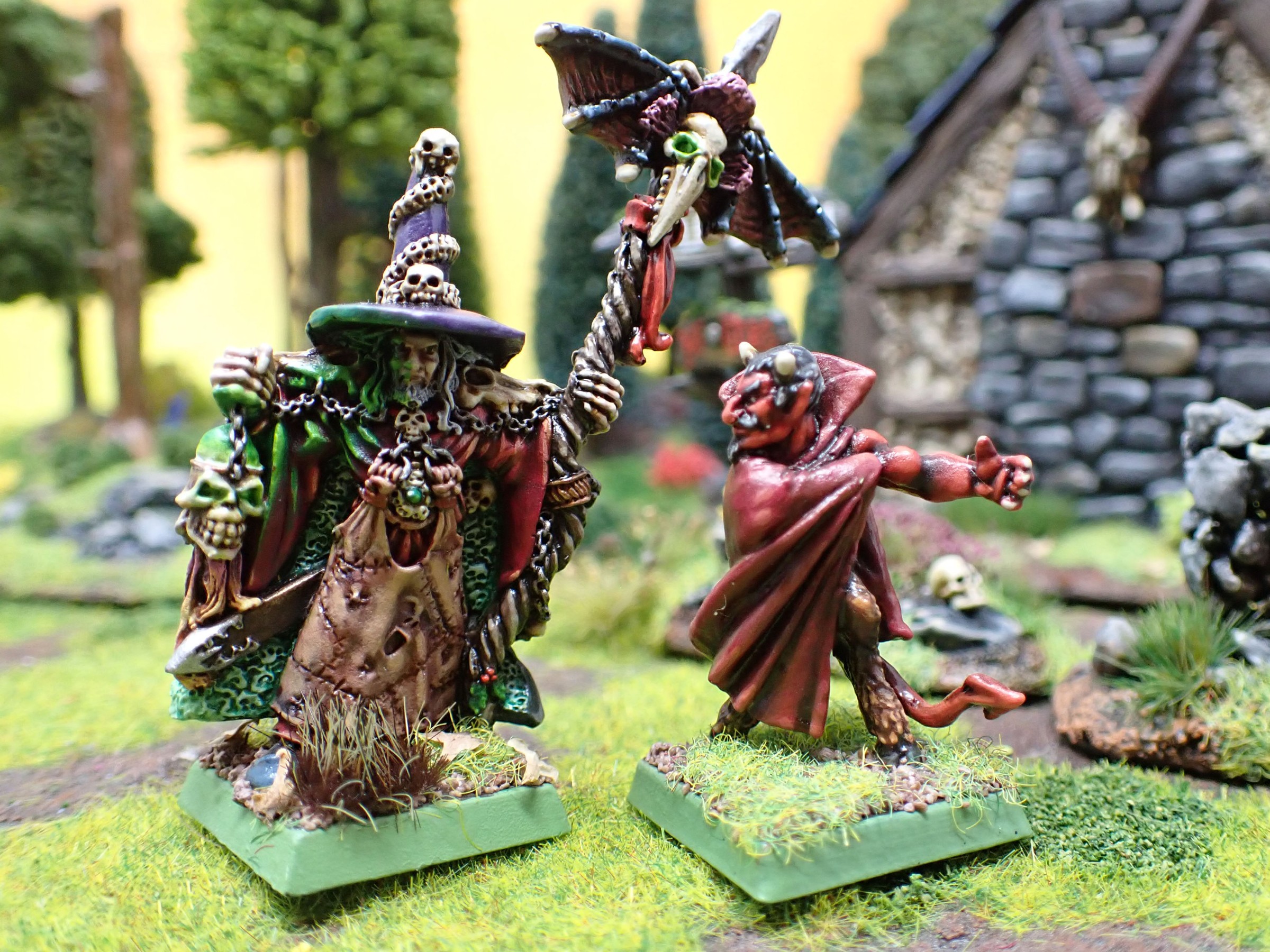 After last month’s return to blogging (and last year’s efforts at terrain making) it is at long last time to post some painted miniatures. And what better way to celebrate my return from the dead that with a couple of undead – Heinrich Kemmler (the Lichemaster), and the Devil himself?

Heinrich Kemmler probably needs no introduction for anyone reading an obscure blog post about old Warhammer Fantasy miniatures. Introduced in the 1986 Terror of the Lichemaster supplement, and re-designed in the ’90s, the eponymous villain is one of their most popular characters and generally reckoned to be an excellent miniature. Except… it’s not really the Lichemaster. It’s a reissue, that was sold on Games Workshop’s webstore as a generic necromancer, and he really doesn’t get top-billing:

Necromancers are widely regarded as twisted and corrupt individuals who are obsessed with death and the avoidance of it at all costs. They are used (for they are rarely their own master) by Vampires to animate the broken corpses of their servants and return them to battle. To learn such dark magic, these desperate men will seek out a Necromancer or a Vampire to teach them…

But still, it’s the same miniature, right? I took the plunge and bought this “finely detailed resin cast kit” (emphasis added, but really, not enough). The cast was riddled with imperfections – which I did my best top clean up, but it’s easy to see one on the tip of his beard, and there’s a big one on his staff. The lightweight material becomes strangely top-heavy on the provided 20mm base. I choose what I hope is a suitably garish ’90s colour palette, although I did tone it down a bit during the process, and took the oportunity to practice object sourced lighting. I don’t regret giving this a go, and I’m happy with the result, but I will think twice before choosing resin over white metal again.

Still, you can’t go wrong with good old fashioned lead, right? And I’ve got nothing but love for Citadel’s Night Horrors range – they’re some of my favourite miniatures, I’ve had consistently satisfying results painting them before, and this is one I’ve wanted to pick up for a while.

A little short, isn’t he? And a little glossy too. I’m not sure if it was the cold weather, a faulty spray can, or maybe if it had been in storage for too long, but something went wrong with a batch of half a dozen miniatures that I undercoated in December. I usually give the little guys a nice bath in warm water and scrub them with dishwashing liquid, rinse well, dry, and then a day later spray on a coat of Army Painter Matt Black. I did the same thing here, but for whatever reason it dried even more ‘matt’ than normal, and didn’t seem to adhere to the lead well. I think I’ve been able to salvage it with an extra layer of gloss varnish, and it’s not like they get a lot of handling (I paint for display) but still, I’m a bit of a perfectionist and find this irritating.

The lightbox and background terrain objects seem to have worked pretty well, though. I think I need to add some extra ground-level lighting in future, especially for anything with a hat or sheltering wings, but overall think this was worth the effort and given my miniatures a lift.

I’ve lined up some more posts for the next few weeks, so coming soon are some Otherworld Miniatures, some pen-and-ink drawing, and some traditional crafts.

2 Comments on “Back from the Dead”