I’m definitely not going to start a miniature bestiary (if ‘A’ is for ambull then ‘Z’ is for zombie dragon).  I’ve got loads of other things to work on already, deadlines at work (‘Z’ is for zoat), and my final university assignment in a couple of months (‘z’ is for Zygor Snake Arms).  But enough idle plans!  I’ve painted a Rogue Trader ambull, and that’s all I’ve got for today. 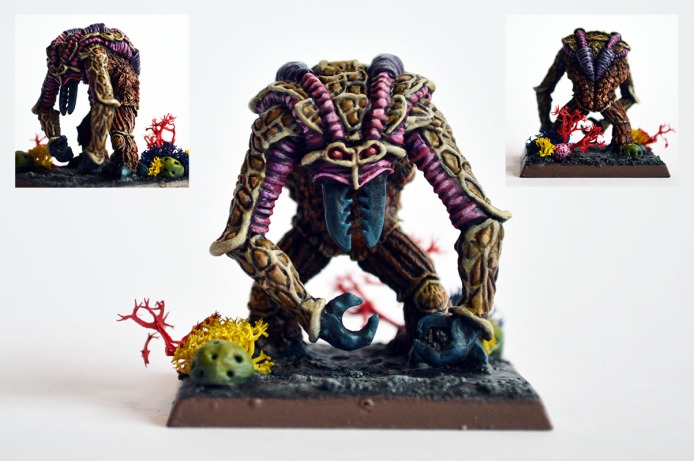 I don’t normally collect sci-fi minis, but the ambull is a strange one.  It was included in Citadel’s Combat Cards deck ‘Monsters‘, which is where I first saw it, and features in a Warhammer Fantasy RPG scenario.  It was probably a copyright-free riff on the D&D Umber Hulk was the first Citadel Miniature I every bought, in a small independent shop in Carlisle in the early 1990s.  I think the shop was called ‘Games Store’, and I remember they sold a mix of board games, Commodore 64 cassettes, and lead miniatures.  I wanted a Great Fire Dragon, but it was out of my price range – at the time it was one of the biggest fantasy miniatures I’d ever seen.  And I remember a couple of people at school complaining that I should have bought Chaos Space Marines.  I didn’t care.  To this day the ambull is one of my favourite minis, and I’m glad to see it gets a lot of love today, and has inspired a few imitators (like this excellent crawling insectoid).  Not bad for something that used to get given away for free.

My first ambull, alas, didn’t survive the intervening years, and even this replacement has seen some action.  The distortion and worn details are beyond my skill to fully repair, but I’ve tidied him up as best I can, rebuilt some of his armour plating and sculpted a few alien fungi to give the base some character.  In the lore, they’re subterranean creatures who love digging, so I opted for earthy colours on the undercarriage, a bony carapace to reflect the 90s portrayal, purple-pink tubing to match my recent Otherworld owlbear (who he scales perfectly with), and just for fun a deep green-black on his claws and mandibles.  This looked terrible when I put the base layers down, but after the first shade wash and some detailing it started to vaguely resemble Games Workshop’s more recent Tyranid colour schemes.

It’s a satisfying piece to paint, covered in different textures and with a couple of tricky corners, big enough to hold lots of detail without getting too fiddly and nice and heavy to hold.  It’s one of the smaller monsters, so it looks great with 25mm-28mm miniatures but would be a bit small with more modern ‘heroic’ and 32mm scale.

Tom Meier’s zombie dragon was available from Ral Partha Europe until a couple of months ago for $9.95 – maybe next time.